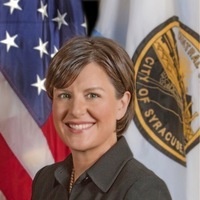 Wrestling With an Octopus: A Conversation about the Challenges of Governing, Stephanie Miner, Charles Evans Hughes Visiting Chair of Government & Jurisprudence; Tim Byrnes, Charles A. Dana Professor of Political Science

Stephanie A. Miner  is  a  leading national expert on public finance and infrastructure and served as 53rd Mayor of Syracuse, New York. Mayor Miner was the first woman to lead one of New York’s “Big 5” cities. She served the people of Syracuse from 2010 through 2018 as mayor and from 2002 through 2009 as a city councilor.  In  2018,  she  was an independent candidate for Governor of New York, where she was the only woman to lead a party ticket in the state that year. She secured enough votes to create a new ballot  line in the state, the Serve America Movement. She served as a Visiting Distinguished Urbanist at the Wagner School of Public Affairs at New York University in 2018 and is currently a member of the board at the Volcker Alliance.