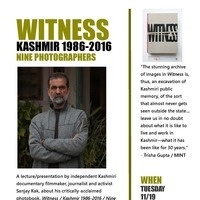 A lecture/presentation by Sanjay Kak.

Sanjay Kak is an independent documentary filmmaker and writer based in New Delhi whose recent work includes the films Red Ant Dream (2013) about the persistence of the revolutionary ideal in India, Jashn-e-Azadi (How we celebrate freedom, 2007) about the idea of freedom in Kashmir, and Words on Water (2002) about the struggle against the Narmada dams in central India. He is the editor of the anthology Until My Freedom Has Come – The New Intifada in Kashmir (Penguin India 2011, Haymarket Books, Chicago 2013). In 2017 he curated, edited and published the critically acclaimed photobook, Witness – Kashmir 1986-2016, Nine Photographers, which was listed among the ten best photobooks of the year by the New York Times Magazine, and which will be the focus of his lecture/presentation at Colgate.

Mr. Kak’s visit will be incredibly timely and of enormous value to our students and to the wider Colgate community. In August this year, the Indian government rescinded Jammu and Kashmir’s sovereignty, bifurcated it, and reduced its status to that of a Union Territory, ruled directly from New Delhi. Since then, the state has been under siege, with a population of some 8 million locked down and cut off from the outside world. Kashmiri voices, absent from mainstream discussions of South Asia in normal times, have been further cut off thanks to the communications blockade. Kak’s lecture/presentation will help further our understanding of the situation in Kashmir, while raising our awareness of the talented and courageous work done by Kashmiri photographers living under a decades-long military occupation.