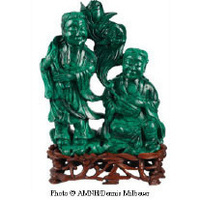 The Beauty of Sculpted minerals will be on exhibit in the Robert M. Linsley Geology Museum until November 15, 2019. The museum is located on the atrium level of the Robert H.N. Ho Science Center and is open weekdays in July and August from 10:00 am to 4:00 pm, and on weekdays during the academic year from 9:30 am to 4:30 pm.