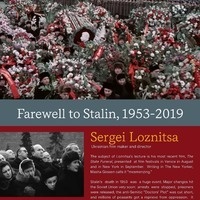 The subject of Loznitsa's lecture is his most recent film, The State Funeral, presented at film festivals in Venice in August and in New York in September.  Writing in The New Yorker, Masha Gessen calls it “mesmerizing.”

Stalin's death in 1953 was a huge event. Major changes hit the Soviet Union very soon: arrests were stopped, prisoners were released, the anti-Semitic “Doctors’ Plot” was cut short, and millions of peasants got a reprieve from oppression. It was also a major psychological event, as Loznitsa masterfully demonstrates through his editing of many hours of footage created for the 1953 documentary The Great Farewell. The lecture will include clips from his film and describe the artistic intent and method that transformed 1953 footage into a 2019 documentary.

Sponsored by the Forum on Security & Democracy; Division of University Studies; The Center for Freedom & Western Civilization; and Film Studies