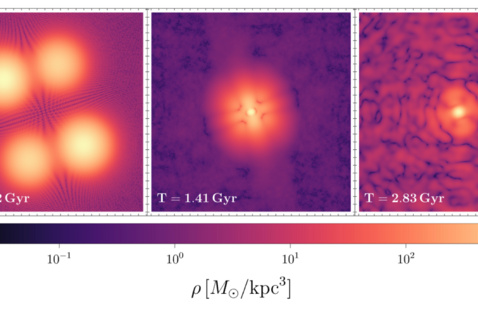 J. Luna Zagorac (CU'16), Graduate Student in Physics, Yale University, will present. f the outstanding problems in astronomy, the nature of dark matter is certainly one of the most mysterious. Containing five times more energy density than its luminous counterpart, dark matter has been shaping the large-scale structure of our Universe for billions of years. One promising dark matter candidate is called Fuzzy or UltraLight Dark Matter (ULDM). ULDM is a well-motivated axion-like dark matter candidate whose incredibly small mass results in naturally cored profiles, thus ameliorating many of the small-scale problems of the generic cold dark matter (CDM) particle while maintaining the same robust large-scale results. When unperturbed, the lowest energy solution of the ULDM system is a spherical “soliton” structure with a known mass density profile. A ULDM dark matter halo is formed through collisions of these solitons and has two characteristic parts: a central soliton core and a “skirt" surrounding it. In order to investigate ULDM dynamics, I calculated the full spectrum of eigenstates for ULDM systems with approximately stationary potentials, thus allowing me to 1) link qualitative behavior of soliton cores in ULDM simulations with specific modes and 2) decompose my simulations of ULDM halos into individual eigenstates. Using this formalism, I investigated the formation of halos through soliton collisions and the dependence of the final halo product on initial parameters. Crucially, this allowed me to explore how halo cores form and explain discrepancies in the literature surrounding the core-halo mass relation: a key prediction of ULDM.