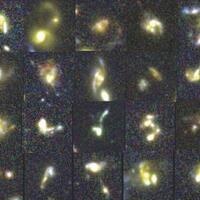 Jeyhan Kartaltepe '03, Assistant Professor, School of Physics & Astronomy, RIT, will present. Galaxy mergers and interactions are thought to play a key role in the evolution of galaxies. These collisions can affect many important galaxy properties, such as their physical structure, their star formation rates, and the growth of their central black holes. However, the details of this role, and how it has changed over the age of the Universe, is still a matter of much debate. Both theoretical models and some recent observations have suggested that mergers do not play a dominant role in the early Universe, but that instead much of the mass growth of galaxies and their black holes can be attributed to secular processes such as disk instabilities. Dr. Kartaltepe will present the results of a detailed, multiwavelength analysis of galaxy mergers and interactions and their impact on black hole growth via AGN (Active Galactic Nuclei).  She will also discuss plans for future work using new facilities in order to better understand and quantify the significance of this role.