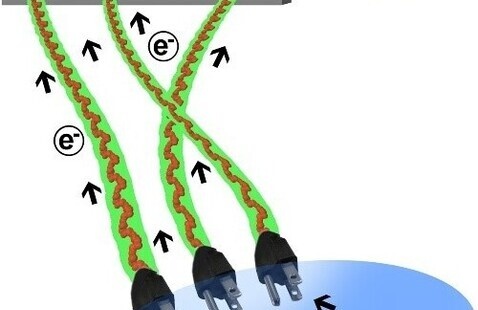 Deep in the ocean or underground, where there is no oxygen, Geobacter bacteria “breathe” by projecting tiny protein filaments called "nanowires" into the soil, to dispose of excess electrons resulting from the conversion of nutrients to energy. These nanowires enable the bacteria to perform environmentally important functions such as cleaning up radioactive sites, generating electricity, or sharing electrons with other bacteria. Scientists have long known that Geobacter make conductive nanowires – 1/100,000 the width of a human hair – but no one had discovered what they are made of and why they are conductive.

Prof. Malvankar will present recent studies in the Protein Nanowires Lab that have revealed a surprise: the protein nanowires have a core of metal-containing molecules called hemes. Previously nobody suspected such a structure. Using high-resolution cryo-electron microscopy, they were able to see the nanowire’s atomic structure and discover that hemes line up to create a continuous path along which electrons travel. He will present their recent experimental and computational studies to identify the nanowire composition, structure and mechanism of conductivity by measuring their DC and THz conductivity as a function of nanowire length, temperature, frequency, pH and heme stacking. He will also present bioinspired synthetic protein nanowires and methodology to set standards for reporting protein conductivity mechanisms. These studies solve a longstanding mystery of how nanowires move electrons to minerals in the soil or help generate electricity.