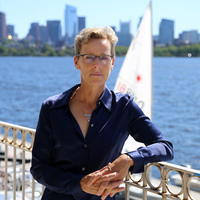 The Peace and Conflict Studies program invites you to our annual Peter C. Schaehrer Memorial Lecture. The lecture "The Great Chernobyl Acceleration: Environment and Health in the Nuclear Age" will be given by Kate Brown, Thomas M. Siebel Distinguished Professor in the History of Science at the Massachusetts Institute of Technology.

What do we know about the Chernobyl disaster? Working through Soviet archives, historian Kate Brown encountered many contradictory accounts of the catastrophe and its effects. Local doctors reported “a public health disaster” among people exposed to Chernobyl fallout. International experts refuted that claim. Realizing that although people and archives lie, trees probably don’t, Brown turned to scientists—biologists, foresters, physicians, and physicists—to help her understand the ecology of the greater Chernobyl territories.  She learned that contaminants saturated local eco-systems long before the Chernobyl accident and continued long after the 1986 event. Brown argues that to call Chernobyl an “accident” is to sweep aside the decades of radiation exposure that rained down on the globe during the period of nuclear testing. Instead of a one-off accident, Brown argues that Chernobyl was a point of acceleration on a timeline of radioactive contamination that continues to this day.

This will be a Zoom event. Please register using the button to the right.