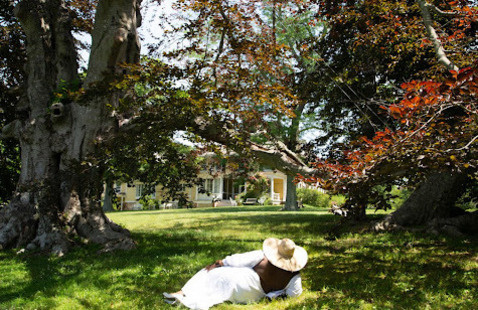 Over the last decade, Faustine has traced places around New York’s five boroughs where enslaved Africans were bought and sold, lived and died, and were buried. Through self-portraiture, Faustine powerfully inserts her own body into these sites, standing in as a monument to the lives of New York’s Black and Indigenous populations and to the largely obscured and unacknowledged history of displacement and human trafficking that built the city.

Nona Faustine is a native New Yorker, award-winning photographer, and public speaker. Her work focuses on history, identity, and representation, evoking a critical and emotional understanding of the past. Faustine's photographs have been exhibited both nationally and internationally, and have been collected by the Studio Museum of Harlem, Carnegie Museum of Art in Pittsburgh, and the Brooklyn Museum. In 2021 Faustine’s photographs were acquired by the North Dakota Museum of Art in Grand Forks, the Frederick R. Weisman Art Museum at the University of Minnesota, the Rose Museum at Brandeis University, the Minneapolis Institute of Art, Baltimore Museum of Art, Museum of Fine Arts, Boston, and the Lumber Room in Portland, Oregon. In 2022 her work was acquired by the Los Angeles County Museum of Art. Her much acclaimed White Shoes series was recently published by MACK Books.

Faustine’s work has recently been included in exhibitions nationally at the Baltimore Museum of Art and the Afro-Atlantic Histories exhibition at the National Gallery of Art in Washington D.C. This fall 2022, her work debuts at the Armory Show in New York with Higher Pictures Generation and internationally at the Kunstmuseum Wolfsburg, Germany in October.