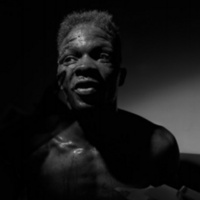 Larry Fink discusses the photographs in his Boxing series, on view in the Picker Art Gallery exhibition, Larry Fink: Beyond the Gloves. These bold photographs reveal how race relations and social inequality in America are on display through modern-day sanctioned violence, while simultaneously giving a glimpse into the gentle moments that are as much a part of the world of boxing as the fights themselves.

Over a fifty-five year career, Larry Fink has had one-man shows at New York’s Museum of Modern Art, the Whitney Museum of Modern Art, the Musée de l’Elysée in Lausanne, Switzerland, the Musée de la Photographie in Charleroi, Belgium, and a retrospective at Fotografia Europea 2019 in Reggio Emilia, Italy, among many others. Larry was the recipient of the Lucie Award for Documentary Photography in 2017, and in 2015, he received the International Center for Photography (ICP) Infinity Award for Lifetime Fine Art Photography. He has also been awarded two John Simon Guggenheim Fellowships and two National Endowment for the Arts Individual Photography Fellowships. Larry’s work is the subject of over a dozen monographs with subject matter that crosses the class barrier in unexpected ways, most recently The Beats (L’Artiere/powerHouse) and Larry Fink on Composition and Improvisation (Aperture). He has taught at Yale University, Cooper Union, and Bard College.

Co-sponsored by the Department of Art & Art History, the Picker Art Gallery and University Museums.