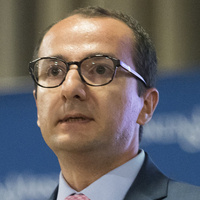 Khatchig Mouradian is a lecturer in Middle Eastern, South Asian, and African Studies (MESAAS) at Columbia University, where he also heads the Armenian studies program. Mouradian’s book The Resistance Network: The Armenian Genocide and Humanitarianism in Ottoman Syria is forthcoming in 2020. Mouradian is also the author of articles on genocide, mass violence, unarmed resistance, and approaches to teaching history; and the co-editor of a forthcoming book on late-Ottoman history (also in 2020). He has taught courses on imperialism, mass violence, urban space and conflict in the Middle East, the aftermaths of war and mass violence, and human rights at Worcester State University and Clark University in Massachusetts, Rutgers University and Stockton University in New Jersey, and California State University – Fresno. Mouradian has written for the Washington Post, and has been Interviewed, quoted, or his scholarship discussed and referenced in The New York Review of Books, BBC, France 24, The Economist, The Washington Post, The Boston Globe, Newsweek, Al-Monitor, among others.