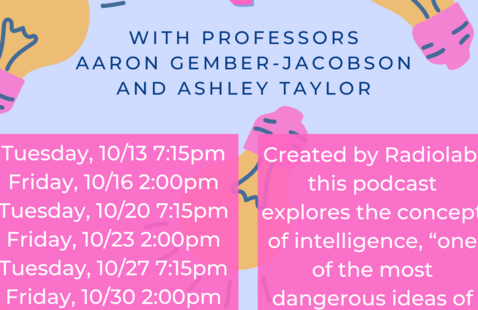 This podcast, created by Radiolab and featuring scientists, educators, comedians, legal experts, journalists, and even some dogs, explores the concept of intelligence, “one of the most dangerous ideas of the past century.” In six hour-long episodes, the series “unearths the fraught history (and present-day use) of IQ tests, digs into the bizarre tale of one man’s obsessive quest to find the secret to genius in Einstein’s brain, reveals the ways the dark history of eugenics have crept up into the present, looks to the future with a controversial geneticist who has created a prenatal test for intelligence, and stages a raucous game-show throwdown to crown the smartest animal in the world.” Together, we’ll discuss each unique episode and ask big questions like “Who (or what!) is intelligent? Is intelligence quantifiable? Should social hierarchies be formed on the basis of intelligence?”

PE credit upon completion of the group. Space is limited.