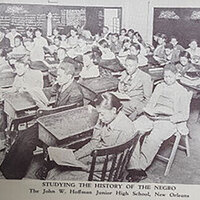 Fugitive Pedagogy in the Jim Crow Classroom: The Case of Carter G. Woodson

Carter G. Woodson (1875-1950) was more than “the father of Black history.” He was first and foremost a schoolteacher, deeply situated in the broader atmosphere of African American teacher associations and school networks. What’s more, teachers across the country employed furtive means to put Woodson’s ideas into practice in their classrooms. They welcomed his school textbooks, Negro History Week celebrations, and his ideas about race, power, and curriculum to be a necessary criticism of the American School. This talk analyzes the relationship between Woodson and African American teachers, revealing how these educators modeled what it means to be within, yet against, an oppressive school structure. The story reminds us that there were secret things teachers did, beyond the watchful eye of Jim Crow school authorities. Thus, how do we contend with the practices African American teachers intentionally kept off the record? To this end, the case of Carter G. Woodson raises critical methodological questions about studying the history of African American schooling and the precarious nature of archival sources for thinking about the interiority of black educational life.

Professor Jarvis R. Givens is an assistant professor of education and African and African American Studies at Harvard University, and the Suzanne Young Murray assistant professor at the Radcliffe Institute for Advanced Study. His research is situated at the intersection of African American history, the history of schooling, and critical theories on race, power, and education.