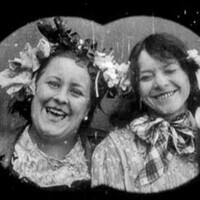 FOLLOWED BY A Q&A WITH FILM SCHOLARS AND
CURATORS MAGGIE HENNEFELD AND LAURA HORAK!

Housemaids explode, buildings collapse, inanimate objects come to life, and police officers are electrocuted in this archival screening, which offers a rare glimpse into the feminist exploits of silent film comedy! Featuring nine short films, accompanied by seven different musicians, all produced in France from 1910-1913, we spotlight selections from “Cinema’s First Nasty Women,” a 4-disc DVD/Blu-ray set that will be released by Kino Lorber in May 2022. Watch the whole world comically fall to pieces as “nasty women” playfully assert their new positions in a carnivalesque society.