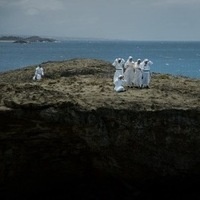 Join us for an online screening series, followed by a Friday Q&A via Zoom. Links to the films will be provided a week before the Zoom discussion.

When Hurricane Maria made landfall in Puerto Rico in 2017, it was one in a series of storms that have garnered significant media attention. In Landfall, director Cecilia Aldorondo examines the devastation wrought by this storm in concert with the island’s perilous economic situation: a 72-billion-dollar debt crisis that long preceded the storm. Landfall offers glimpses into the everyday lives of Puerto Ricans, as well as encounters with politicians and others—cryptocurrency traders, luxury real estate developers, and so on—seeking to capitalize on the economic and environmental situation, all against the backdrop of protests that led to the resignation of the territory’s governor in 2019. Winner of a Grand Jury Prize at DOC NYC and Best Documentary Feature at the Boston Latino International Film Festival and Guanajuato International Film Festival.

Cosponsored by Core Communities and Identities and Africana and Latin American Studies.