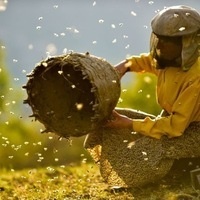 Honeyland is an award-winning documentary selected as North Macedonia's entry for the Best International Feature Film at the 92nd Academy Awards. It uses life in a remote village in Macedonia to offer an eye-opening perspective on experiences that should resonate even for audiences halfway around the world. Indiewire called it “a bitter and mesmerically beautiful documentary that focuses on a single beekeeper as though our collective future hinges on the fragile relationship between her and the hives.”