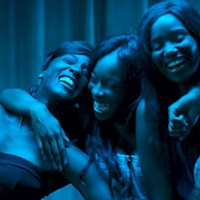 Girlhood is a memorable coming-of-age story told from the point of view of Marieme (Karidja Touré), a girl who lives in a rough neighborhood on the outskirts of Paris. This heartbreaking and highly original film discusses and challenges conceptions of race, gender and class; Celine Sciamma's goal was to capture the stories of black teenagers, characters she claims are generally underdeveloped in French cinema. The result is mesmerizing, honest, and unforgettable.