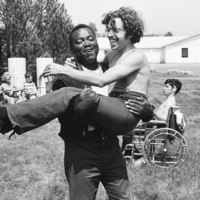 Join us for an online screening, followed by a Friday Q&A via Zoom. Links to the films will be provided a week before the Zoom discussion.

Winner of the 2020 Sundance Film Festival's Audience Award, Crip Camp brilliantly depicts the early days of disability activism in the United States. The film starts in 1971 at Camp Jened, a summer camp in New York described as a "loose, free-spirited camp designed for teens with disabilities". It focuses on those campers who turned themselves into activists for the disability rights movement and follows their fight for accessibility legislation. A must-see documentary regaining a new sense of urgency in days of a global pandemic.