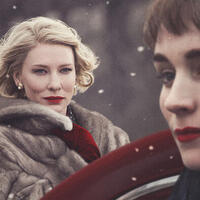 Therese Belivet, a young woman in her 20s, is a clerk working in a Manhattan department store and dreaming of a more fulfilling life when she meets Carol, an alluring woman trapped in a loveless, convenient marriage. As an immediate connection sparks between them, the innocence of their first encounter dims and their connection deepens. An adaptation of Patricia Highsmith’s influential novel The Price of Salt, Todd Haynes’s critically acclaimed film follows two women from very different backgrounds who find themselves in an unexpected love affair in 1950s New York.

The screening will be followed by a Q & A with the renowned indie film producer Christine Vachon.