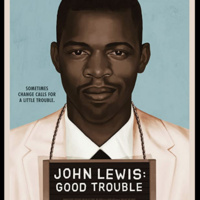 Join us for an online screening series, followed by a Friday Q&A via Zoom. Links to the films will be provided a week before the Zoom discussion, which will be held on Fridays at 5pm.

Using interviews and rare archival footage, this documentary chronicles the late John Lewis’s 60-plus years of social activism and legislative action on civil rights, voting rights, gun control, health-care reform and immigration. Through interviews with an eighty-year-old Lewis, filmmaker Dawn Porter explores his childhood experiences, his inspiring family and his fateful meeting with Dr. Martin Luther King Jr. in 1957. In addition to her interviews with Lewis and his family, Porter’s primarily cinéma verité film also includes interviews with political leaders, Congressional colleagues, and other people who figured prominently in his life.

Part of Colgate's two-week celebration of the legacy of Martin Luther King, Jr.

I enjoyed the talk very much. The perspectives that the faculty and student had were very insightful. I appreciate the short clips here and there. They remind me of which parts conveys what messages.

Thank you for organizing the event.