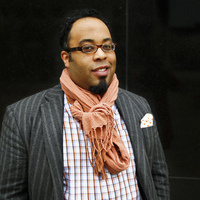 Kevin Young is the Director of the Schomburg Center for Research in Black Culture and is widely regarded as one of the leading poets of his generation. Young is also poetry editor at The New Yorker. Also an editor, essayist, and curator, Young’s eleven books of poetry include: Brown (2018), a New York Times Notable Book; Blue Laws: Selected & Uncollected Poems 1995-2015 (Knopf, 2016), longlisted for the National Book Award; Book of Hours (Knopf, 2014); Ardency: A Chronicle of the Amistad Rebels (Knopf, 2011), winner of an American Book Award; Dear Darkness (Knopf, 2008); For the Confederate Dead (Knopf, 2007); Black Maria (Knopf, 2005); To Repel Ghosts (“Remix,” Knopf, 2005); Jelly Roll: a blues (Knopf, 2003), a finalist for the National Book Award and Los Angeles Times Book Prize and winner of the Paterson Poetry Prize; and Most Way Home (William Morrow, 1995), winner of the National Poetry Series and the Zacharis First Book Award. His newest book of poetry is Brown (Knopf, April 2018).

Named University Distinguished Professor at Emory University, Young was inducted into the American Academy of Arts and Sciences in 2016. His many other honors include a Stegner Fellowship in Poetry at Stanford University, a Guggenheim Foundation Fellowship, a MacDowell Colony Fellowship, and an honorary doctorate from Beloit College. Kevin Young was named a Time Magazine ‘Champion of Culture’ of 2019.