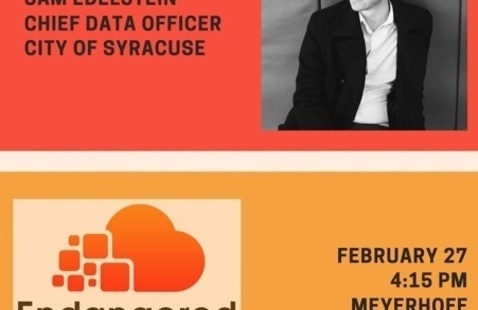 Sam Edelstein, Chief Data Officer for the city of Syracuse, will discuss the creation of the city's first open data portal: DataCuse. During his talk, Same will highlight ways in which civic data can inform both public policy and urban planning.

In March 2016, the City of Syracuse hired its first Chief Data Officer. Part of the responsibilities for this position included creating a process and program to release city-collected and created data to the public.

Through a partnership with Bloomberg Philanthropies' What Works Cities Initiative, the City of Syracuse created an Open Data Policy and allowed the public to make comments on it (read the first version of the policy, including comments, here).

In order to measure the success of the program, the city partnered with a masters of public administration capstone class at the Maxwell School at Syracuse University. As a result, the city of Syracuse created a set of recommendations for the best ways to broacast the open data portal and measure its impact.