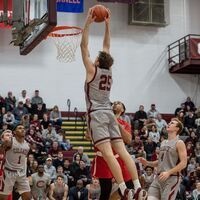 It is Colgate's historic third-consecutive appearance in the league championship, representing the team's chance to punch their second consecutive ticket to the NCAA's March Madness tournament.