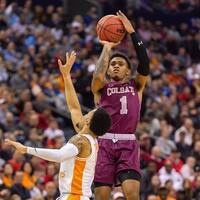 The most wins in program history

The longest win streak in 90 years

The Patriot League Championship runs through Hamilton for the first time since 1996.

Colgate faces league foe Bucknell in a nationally televised championship rematch on Wednesday. The Raiders are 1-1 with the Bison in the regular season, most recently defeating Bucknell 75-64 here at home last month. A packed Cotterell Court delivered a sixth man in the quarter- and semifinal wins over Boston University and the Naval Academy, but with the university on spring break while and the Raiders only one game away from punching their ticket to the dance it is even more important that you come cheer them on to victory.