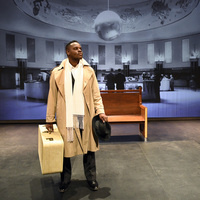 Citizen James, or the Young Man Without a Country (Virtual)

Young James is an unknown aspiring “Negro” writer whose first novel has yet to be published. He awaits his flight, having just left his family with the news of his decision to flee America for refuge in Paris. He speaks no French. He has a one-way ticket and $40 in his pocket.

Witness James Baldwin as he decides he must do something to save himself from the violent reality of racist America in 1948, a decision that sets him on the path to becoming a brilliant, powerful, and prophetic voice of the Civil Rights era and beyond. More than a one-man show, Citizen James is a bridge that connects the past to our now.

This presentation of Citizen James, or the Young Man Without a Country has been made possible with the generous support of the ALANA Cultural Center and the Department of Theater.

The viewing link will be sent directly to the ALANA Cultural Center and Department of Theater's mailing lists on April 5, 2021.  To join, contact dcrandall@colgate.edu.