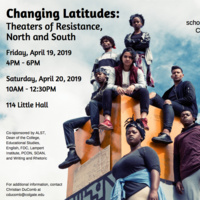 A symposium on staging resistance and resisting exclusion through theater and performance in South Africa, Sri Lanka, and the US, with artists and scholars from the University of Cape Town, Georgetown University, and Colgate.

In 2015, students at the University of Cape Town (UCT) organized to demand the removal of a prominent statue of Cecil Rhodes from their campus.  A recent play called The Fall, created and performed by UCT’s Baxter Theater Center and facilitated by Clare Stopford, dramatizes both the powerful unity and the complex fissures of the student protest movement, which ultimately resulted in the “the fall” of Rhodes’ statue.  The Fall has toured to London, Edinburgh, New York, as well as Bordeaux, Galway, Pretoria, Melbourne, and Washington, DC -- a remarkable feat for a new play about a local protest movement, created by a collective made up largely of recent university graduates.  In addition, The Fall clearly resonates with calls by American activists to remove Confederate monuments and memorials, which have led to highly theatrical protests and counter-protests in communities throughout the US.

The Fall is but one example of a robust “theater of resistance” in contemporary South Africa, which both draws upon and differs from the anti-apartheid theater of Athol Fugard, John Kani, Winston Ntshona, Barney Simon, and other iconic South African theater artists.  Another example is theater that seeks to resist the socially constructed “scripts” that exclude large groups of people from full participation in South Africa, even after the fall of apartheid.  Veronica Baxter’s Second Chance Theater Project resists the “script” which casts criminals as monsters by using applied theater techniques with offenders in a local prison, reducing the stigma of incarceration and asserting prisoners’ human rights.

Changing Latitudes: Theaters of Resistance, North and South, will bring together faculty and students from UCT and Colgate for a two-day symposium on “theaters of resistance,” centered on South Africa and the US, but oriented toward a broader investigation of theater as a practice for enacting political change across the north/south divide.  The symposium will interrogate both the potential and the limitations of theater as a tool of resistance; theorize emerging trends in political theater in both the “global north” and the “global south”; and seek to understand the relationship between theater as an aesthetic medium and the theatrical tactics of contemporary protest movements, from #blacklivesmatter to #rhodesmustfall.