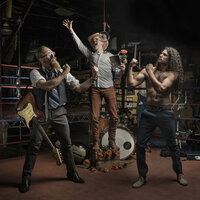 Brown Commons Coffeehouse is going country (sort of) when it welcomes the highly regarded singer-songwriter, Jonathan Byrd, to the stage (ok, it's really a large rug). Byrd is a preacher's son, a Gulf War veteran, and an award-winning songwriter from Chapel Hill, North Carolina, known for literary, outsider songs that have become Americana favorites. With songs like the brilliant I Was an Oak Tree to his credit, The Chicago Tribune called Byrd "one of the top 50 songwriters of the past 50 years." Artists from bluegrass to indie-folk have cut songs he has penned.

Byrd churned out eight albums between 2001 and 2014, all solo with the exception of a duo with the fiddle playin' Chris Kokesh (The Barn Birds). The most recent release Jonathan Byrd and The Pickup Cowboys (2018) comes two years after the tragic loss of a band member and cellist, Paul Ford. The album finds Byrd at the top of his career blending the depth of his songwriting in creative arrangements that defy classification. Jonathan Byrd is a "road warrior" and a seasoned entertainer. Exactly the type of performer you want to experience in a setting like the Coffeehouse.

We will have fresh coffee from FoJo Coffee Roasters and sweet treats from Flour and Salt Bakery. All items are $1 a piece. All proceeds will go to a local arts-related non-profit organization.

Admission is free and open to the public. We expect demand to be high for this performance and ask that you please reserve your free general admission ticket on this site.

(Those without tickets are still encouraged to come, but will be admitted based on availability.)

Register
This event content is powered by the Localist Community Event Platform.