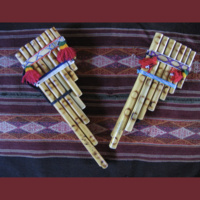 Música de Maestros or "Music of the Masters" is a Bolivian ensemble founded in the 1980s by Rolando Encinas with the specific objective of researching and performing this country's master composers. The group's name explicitly evokes comparisons. If Germans have their Beethoven, Bolivians have their Adrián Patiño and José Salmón Ballivián. In forming their repertoire, the ensemble also draws on the numerous indigenous cultures of a country where the majority of the population self-identifies as indigenous, and where scholars write about the existence of over 34 different ethno-linguistic groups. Música de Maestros was awarded an honor of merit by the country's own Chamber of Deputies in 2014, and the ensemble also has an international touring trajectory that includes Japan, China, Colombia, Chile, France, Germany, and Switzerland.

Four members of Música de Maestros will be at Colgate for a two-week residency in October-November during which time, among other activities, they will teach students enrolled in ALST 204: Performing Bolivian Music how to play Bolivian indigenous wind instruments (panpipes and flutes). The partial credit course will be taught bilingually in Spanish and English under the direction of Michelle Bigenho, Professor of Anthropology and Africana & Latin American Studies. The musicians' residency concludes with a noon concert, Fri. November 1st (the Chapel), in which students from the course will join Música de Maestros in some pieces.

Sponsors: The Bolivian musicians' residency is made possible by a major grant from the Colgate Arts Council, as well as funding from Africana and Latin American Studies, Native American Studies, Sociology and Anthropology, University Studies, Music, Core Communities and Identities, Romance Languages, and Film and Media Studies.