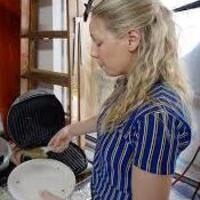 As a multi-disciplinary artist, Dawn Weleski activates and broadcasts the stories of individuals and groups in experimental public performances, where conversation is her process and people her medium. Weleski’s public artwork has earned her international attention, most notably for Conflict Kitchen with Jon Rubin, a restaurant that served cuisine only from countries with which the United States is in conflict, and her multi-city operatic productions on public transit, Bus Stop Opera (2008-ongoing). Weleski earned a BFA in Contextual Practice from Carnegie Mellon University and an MFA from Stanford University.