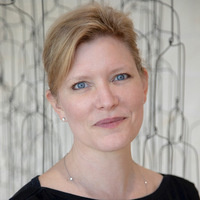 Andrée Bober is a curator and director who works with some of the most admired artists of our time. In 2008, she foundedLandmarks, the public art program of The University of Texas at Austin. Beginning with a long-term loan from the Metropolitan Museum of Art she brought twenty-eight modern and contemporary sculptures to Austin's campus, including pieces by Louise Bourgeois, Tony Smith, and Ursula von Rydingsvard. In 2010 Bober created Landmarks Video, an ongoing series of video art. She has since acquired and commissioned more than a dozen major works by artists such as Marc Quinn, Nancy Rubins, and James Turrell.

Co-sponsored by the President’s Office