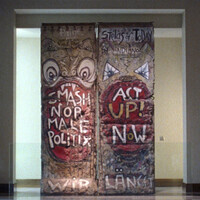 For 18 months, Courtney Stephens and Pacho Velez (Manakamana, The Reagan Show) traveled throughout the US to document sections of the Berlin Wall that are on display in over 75 locations, ranging from the serious (Fort Benning, Georgia) to the bizarre (Main Street Station Casino, Las Vegas). Along the way, interviews with unusual characters who own, maintain, and interact with pieces of the Wall offer a window into American culture, and through the film these Cold War relics become a catalyst for exploring today’s timely issues.