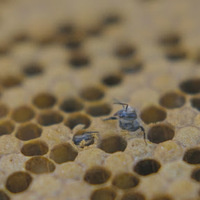 Sarah Christman is a nonfiction filmmaker whose work explores the intersections between people, technology and the natural world. In SWARM SEASON, Christman investigates a remote volcanic island, where ten year old Manu and her mother catch swarms of wild honeybees in order to breed disease resistant colonies. Her father is taking part in a native Hawaiian movement to protect the sacred Mauna Kea mountain from the construction of a massive telescope. On the nearby slopes of Mauna Loa, six NASA scientists are participating in a yearlong mission designed to prepare for life on Mars. Meanwhile, the Kilauea volcano is stirring.

Co-sponsored by the Environmental Studies program.