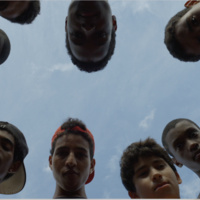 Screening followed by Q&A with Iyabo in person, via Zoom, on October 6, at 8:30pm

An Exercise in Transfiguration  2016, 9min

Between 2014-2017 I felt bombarded by viral videos of police and vigilante violence.  The film is an archival collage that confronts images of police/vigilante violence on black and brown bodies, rejecting their normalcy. It reconfigures the imbedded memories of the visual & sonic nightmare that the colonization places on its people.

Filmed near the Shaolin temple in Henan, China, PRACTICE is visual metaphor that moves from the mundane realm of arduous and repetitious rehearsal to the fantastic fulfillment that comes as a result. Told non verbally and without a main character, "Practice" is an immersive guided meditation into a simple moment in time that relays brief and diverse experiences of a group of students engaged in a collective process.

Macarrrão, the kid whose name means “Spaghetti”, is an awkward skinny boy with a slight lisp.  Trying to fit into a world of constant ridicule, it’s not until he is taken under the local butcher’s wing and introduced to Muhammad Ali’s fighting videos, that Macarrão learns his sting is as sharp as any bee.

In a small rural town by the sea, far removed from the hustle and bustle of the big urban city that surrounds it, people gather every year performing rituals and giving offerings to a mesmerizing Black Christ statue.  The short documentary follows the journey of one man, Arturo Lindsay, as he reflects on how he came to learn of the festival, his observations, and a miraculous and unexplainable healing that occurred in his life as a result of his full participation in the festival.

Iyabo Kwayana is an independent filmmaker and cinematographer who uses sensorial and immersive techniques in cinematography, directing and editing in order to “mobilize and amplify" the more discreet, often hidden aspects of film narratives, compelling viewers towards a transformative experience. She is the recipient of the Fulbright-Hays Fellowship, the Edie and Lew Wasserman Film Production Fellowship, the Stanley Kramer Fellowship in Film Directing and the Women in Film Foundation's Loreen Arbus Fellowship in Cinematography. Her works have screened widely both domestically and internationally, and have received many awards including  Jury Prizes at Zanzibar International Film festival and BlackStar International Film Festival.