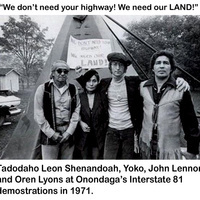 Join us for a very rare screening of Onondagas vs NYS.

Co-produced by the Ithaca Video Project and the Onondaga Nation and released in 1971-72, it's a unique, nearly unknown media object. The video details a protest along Interstate-81, following a dispute over sovereign territory. Following the occupation of Alcatraz, concurrent with Attica, and preceding Wounded Knee, the events along the highway just south of Syracuse, NY mark a small but significant effort in the Red Power social movement. The screening will be contextualized in short presentation as part of a discussion on state funding, the withering thereof, and collectivization in the arts.