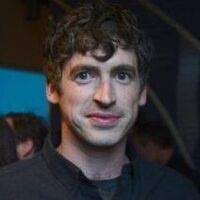 Alternative Cinema: Abounaddara: The Right to the Image

Short screening and presentation with scholar Jason Fox in person!

This presentation offers a critical exploration of the groundbreaking videos and activism of Abounaddara, the anonymous Syrian film collective, framing the ethical, political, and aesthetic insights of their work within the transformative effects of new digital technologies in war reporting and social justice campaigns. Emerging alongside the Syrian revolution in 2011 and fueled by the political aspirations of the Arab spring throughout the Middle East, Abounaddara’s "emergency cinema" critiques and revises mainstream war reporting through their impressionistic videos that make use of the wide reach and anonymity afforded by online video platforms. I consider the collective’s videos alongside their demand for the “right to the dignified image,” a transnational civil protection to augment the notion of “dignity” as described in the Universal Declaration of Human Rights. Through the lens of Abounaddara’s emergency cinema and rights campaign, I argue that the "right to the dignified image" offers a new frame to chart the potentials and consequences for digital (self) representations in human rights and social justice movements in Syria and beyond, including in the work of Black Lives Matter and Idle No More.