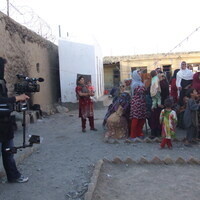 Alternative Cinema: No Burqas Behind Bars

Film available for public viewing from Oct. 16 to 20 via the link: https://medialibrary.colgate.edu/Watch/Tm7d5NMa

A feature-length cinematographic documentary that takes viewers inside an Afghan women’s prison. Through the prisoners’ stories the film shows how “moral crimes” are used to control the female life. Although the all-encompassing burqa normally masks Afghan women’s identity rendering them invisible, here in the prison, we see the power hidden underneath the burqa.

Rozette Ghadery, director of Photography for No Burqas Behind Bars, is joining us in person. Rozette is a Iranian Cinematographer and filmmaker. She was the first female Director of Photography in Iran when she started her filmmaking career. She has shot more than 300 films around the globe. Her award winning works is a testament to her expertise in directing, her grasp of the technical complexities of 2D/3D digital cinema, and her unique vision and subtle sensibility. Rozette is also a painter and a poet. Her practice in both fields has greatly contributed to the lyrical style and the sensual visual approach that have distinguished her film work.