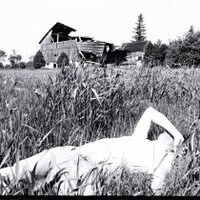 Alternative Cinema: All Fall Down

Screening followed by Q&A with filmmaker Philip Hoffman in person via Zoom at 9:00pm!

All Fall Down is an experimental documentary that takes as its starting point a nineteenth century farmhouse in Southern Ontario, Canada, and asks the question “what has been here before?” The film weaves together a complex temporal structure that juxtaposes the lives of two figures, one historical (Nahneebahweequa: a nineteenth century aboriginal woman and land rights activist) and the other contemporary (an ex-pat drifter and father of the filmmaker’s step daughter) across two hundred years. The film explores these characters through a variety of archival materials: diaries, landscape paintings, photographs, heritage films, poems, phone messages, maps, historical reenactments, songs) that express the complexity of time and the politics of land. The film is structured through Hoffman’s extraordinary landscapes of Southern Ontario which make the temporal fabric shimmer, bringing us a meditation on childhood, property, colonialism, ecology, and love.

A film artist of memory and association, Phil Hoffman has long been recognized as Canada’s pre-eminent diary filmmaker and has been described as "filmmaker of memory and association" whose "highly personal" work blends fiction and documentary and "contests the claim to the truth" that characterizes conventional documentary film.On his 1988 film passing through/torn formations, Stan Brakhage recognized how “Hoffman’s editing throughout is true to thought process, tracks visual theme as the mind tracks shape, makes melody of noise and words as the mind recalls sound.” Hoffman has been honored with more than a dozen retrospectives of his work and many awards around the world. Since 1994, he has been the artistic director of the Independent Imaging Retreat (Film Farm), a one week workshop in artisanal filmmaking in Mount Forest, Ontario. In 2016 Hoffman received the Governor General’s Award in Visual and Media Arts.