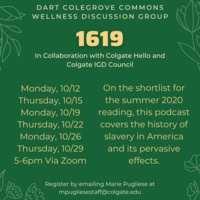 A Dart Colegrove Commons Discussion Group facilitated by Hilary Almanza '22 and Pomelo Wu ’21 and in collaboration with Colgate Hello and Colgate IGD Council.

This podcast was considered for this year's summer reading selection and has been described by Rupika Chakraverti ’20 as "A six-part podcast series created by The New York Times to acknowledge the 400-year anniversary of the arrival in Virginia of the first ship carrying enslaved Africans, The 1619 Project examines and refocuses slavery and how it has shaped the United States. Each of the 40-minute episodes seamlessly transition between deeply personal accounts and national, statistical narratives — the series is both poignant and informative. Tracing the origin of American democracy and capitalism, the podcast precisely carves out the path that led from the twenty-something Africans from present-day Angola on that first ship to the current African-American culture and identity. In the process, Nikole Hannah-Jones (creator and narrator) makes one thing clear: the history she navigates does not affect only black Americans."

PE credit upon completion of the group. Space is limited.